Along with sprouting daffodils and longer spring days, the appearance of the Eurotrash male is a true sign that summer is nearly here. After a winter spent in a Philippe Starck-designed chalet, sheltering like a Bond villain in the Alps, he emerges after Easter in search of parties, shopping and champagne. The Eurotrash summer has begun.


Unfortunately for the rest of us, the UAE/GCC region is starting to play a big role on the annual migration path of the Eurotrash, and — like wild ducks carrying bird flu — they are difficult to avoid. Eurotrash is a stereotype that, like the Hooray Henry, the chav or the Catholic schoolgirl, fulfils its own prophecy. Few people believe they exist until they actually meet the Eurotrash speciman (or worse, a wannabe Eurotrash speciman). So, do yourself a favour: learn to spot the signs before it’s too late.

Their own uniquely lurid and louche brand of bad taste. When the Euro shops (at boutiques in St Tropez or the clothes shop at the Park Lane Hotel), there are no rules. “Won’t Guido and Amir be jealous when they see me in this?” he thinks, trying on a Cavalli snakeskin blazer while his friend Serena stares, bored, at the Rolex Daytona he lent her. The result is a pastiche of the 1920s playboy: a little bit Gatsby, a little bit Steve Rubell.


His favourite label? Flavio Briatore’s Billionaire Italian Couture, accessorised with the skin of the animals he most closely resembles — lizard, crocodile and shark. He also loves complicated watches, although quite why is anybody’s guess, as he is never on time.
THEY COME FROM:
All over. It’s a common misapprehension that Eurotrash have to be European. Most are actually a bit Saudi, a bit Greek and a lot Swiss — because that’s where most of them went to school.

They can answer the phone in 10 languages, but speak none of them well. There is also quite a lot of American Eurotrash (most of them come from Brown University, Providence, the most Euro university in the world), and even the English can go a bit Euro if they spend too much time on St Tropez’s Nikki Beach — although the English sense of decorum usually means that the transformation is short-lived.


THEY LIVE:
Everywhere and nowhere. Euros keep several apartments — all of which have female friends living in them — but have no fixed abode. Instead, their lives are spent following the party (although they are convinced it is actually following them) from Sardinia to St Tropez to St Barts to Russia (for work) to Qatar (for work), Saudi Arabia (for work) to Mexico (for work) to Iran (for fun). “Iran is wild, man,” a Euro once told me.

In London, they dine at Cipriani and Nobu Berkeley (they always order the black cod, but don’t eat it). They dance at Movida in London, Marquee in New York and VIP Room in St Tropez. They are everywhere from May to September — then disappear until it’s time to go skiing.


THEY DATE:
Models, mostly. Euros always have a gay friend who is a booker at a model agency, and who will tell the new girl, Sandi from Nebraska, that she simply must meet Guido because ''he’s a hoot''. A dinner is arranged. The Euro is charming, and always gets a bear hug from the sushi chef at Nobu. And he always pays for everything. He sends flowers and jets and boat tenders. He aims high — and it works.


When it comes to romance, the Euro’s inspiration (and literal patron saint) is the Italian billionaire Flavio Briatore. He is the man baby Eurotrash want to be when they grow up. He is not classically beautiful, yetwomen are drawn to him like Eurotrash to the Etro sale. His life looks fun: full of ''boats and hoes'', cars, open shirts and Clarins sunscreen. Yep. Even I’d date him. 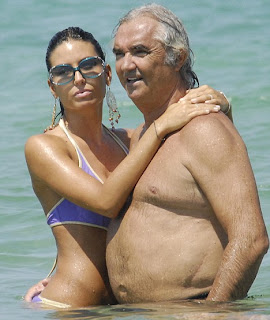 Actually...No. I would not.
THEY LISTEN TO:
Fifty, Puffy and Jay-Z (all of whom they "met" at an "Ibiza after-party"), and anything produced by their “great friend” Nellee Hooper. They are never happier than when they are dancing, and when they’re drunk they have a tendency to scream: “I love to boogie, man!”.

They have their own table at nightclubs, and dance badly but with supreme confidence. Quite often, however, the confidence falters, so instead of dancing, they’ll grab a bottle of Belvedere, shake it around a bit and say something like “Yeah, baby...yeah”. 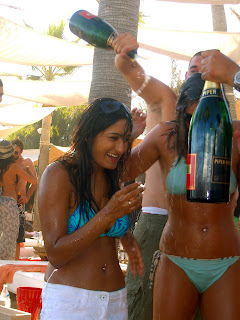 We stink of stale champagne. Yay!
THEY WORK:
Work? Aha. Ha. Ha. Like the second button on the collar of their Interno 8 shirt, most Euros are a bit useless. Instead, they rely for their income on an estate in Perugia, or a dubious business relationship with a sheikh — and because they’re always domiciled somewhere like Monaco, they rarely pay tax. 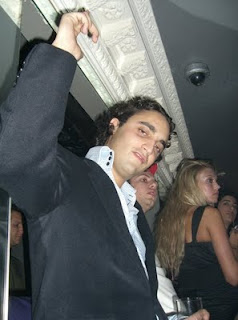 They pretend to be in property, oil or music. They work over lunch via Blackberry until five, when they start receiving calls from nightclub promoters. But mostly they’re just sitting about in marina bars. This is fun for a week — but, try doing it for years.


After a while, doing nothing starts to feel like, well, doing nothing. Of course, you may think all this sounds rather fun, in which case you’re in luck, because being Eurotrash is easy. Just quit your job and go on holiday. For...ever. Find a large, shady source of income, throw away anything you own that could be described as subdued, refined, decent or tasteful, give a lunch party at the Eagle Club in Gstaad, and invite lots of models. Then, empty a bottle of Cristal over your head while saying “Yeah, baby, yeah”. Finish up by saying “ciao”. A lot. And, you’re there!

You will be fabulous and tanned, and will look beautiful in your gold watch and emu-skin bomber jacket. You will also be a significant ass — incapable of holding an intelligent conversation for more than 40 seconds, and my 8 year old cousin could probably crush your genuine lack of self-esteem in an even shorter period of time...but, for the Euro, that’s a small price to pay. ''Ciao!''
at 2:05 AM

Email ThisBlogThis!Share to TwitterShare to FacebookShare to Pinterest
Labels: News and Views, Unable to label