In a post-9/11 world, words such as: politics, religion, gender, east, west, fear, Axis of Evil, Weapons of Mass Destruction, war and freedom define an undercurrent of Western sentiment (but naturally, you would already know this). With the US and UK leading the so called “war on terror”, ultimately redefining cultural ideologies and profoundly altering the subconscious of our societies, the Middle East is represented by images of war, destruction, invalidity and negativity.
In a world driven by these images, constantly portraying cultures from the Middle East and North Africa as one homogonous “Other”, and the use of misleading stereotypes, is creating - pretty much, solidifying - a wave of ignorance and unfortunate Islamophobia.
For those from the MENA region (or those who take the time to form a better understanding of its culture, heritage and outstanding creativity), it comes as no surprise that art currently and previously produced in this part of the world defiantly challenges these notions. Art has continued to resist Western definition and has successfully rejected all expectations through its stunning mediation, analysis and delivery, both from a local and global context. Contemporary art from the Middle East and North Africa, in fact, espouses a vibrant range of dialogues and debates, recently invigorating the international art world. 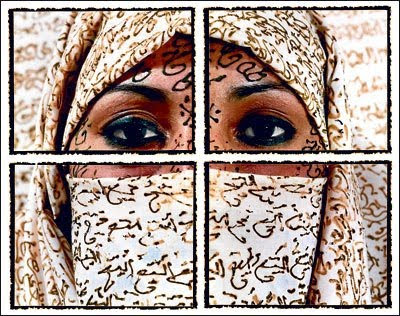 Interest has grown so abundantly that Christie's recently held its eighth series of sales in Dubai, stating that after London, New York and Hong Kong, Dubai has now become one of their most important international sale centres. Since starting and leading the Middle East auction landscape in May 2006, Christies have noted a growing appetite and appreciation for art in the Middle East, and it continues to accelerate.
Christies also said that each sale in Dubai has seen new collectors; the spend of Middle Eastern clients at the company's international sale sites has increased by more than 400 per cent, and more than 50 per cent of new Middle Eastern clients who had taken part in the Dubai auctions, had gone on to participate in Christie's sales around the world. We said, excellent.
at 4:38 PM