It's a well known fact that most print titles in the Middle East don't exactly satisfy the creative lust burning so dangerously within the region's young and inarguably talented.

'It's almost too clean' said my younger sister, a model once residing in Dubai and speaking of the fashion industry she'd just recently become a part of. Although appreciative of the pristine luxury that once surrounded her (she's now in New York), she missed the grit, experimentation and novelty that continues to resound in her hometown: London, British fashion, culture and the arts.

Her observations come as good summary of my own view, when it comes to the Middle East's print media, and their supposed depiction of what is 'now'.

But, is it? Really? My time in the region has very clearly proved otherwise. So too, has UNFAIR magazine. 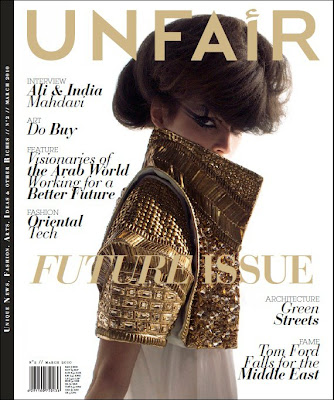 Some of you may remember a title that has now folded: Alef. Far and beyond one of the most striking publications to come out of the Middle East, Alef's photography was artistic, innovative and unsurpassed. It's content however (like, most others) was not entirely intriguing. It was clear that those behind the text were pleased with their Middle Eastern focus, but none actually in, from, passionately living or truly breathing the Middle East. It's a problem I've come across in most titles. Some editors, for example, aren't even based in the countries they're supposed to ''represent''. I mean, how can you truly report on cultural trends, without understanding the language, sensitivities, mannerisms, society.

So, when 'too clean' comes off a little plastic for you; when journalism isn't quite as reflective, or investigative as you would like. When you want for that culture vulture to peck deep into the grass roots activity of an exciting movement in Arabesque fashion and lifestyle, whilst simultaneously flying high amongst the original taste makers of what it is to be 'in the know', we say, UNFAIR.
at 4:41 AM

Email ThisBlogThis!Share to TwitterShare to FacebookShare to Pinterest
Labels: News and Views, Passions in Fashion