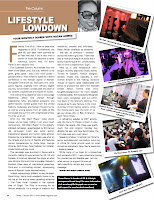 As seen in Oh La La magazine.
Friends. First of all, I have no idea what happened to 2010. Furthermore, the past 60 odd days have zoomed by so fast that yes, I did in fact miss a month of what has become a rather notorious column. I'm sorry. Here's a few reasons why:

The Sudanese Summit: As a female from the heart of the Black Land (it's true, Nefertiti is my great great great - add a few more greats - grandmother) I was invited to speak at a recent conference in the Kenyan capital of Nairobi. Alongside Emmanuel Jal, Ger Duany, and other public figures originally from Africa's largest country, we provided a sneak peak into each of our careers, experiences and hopes for Sudan.
The over-arching objective was to encourage leadership, peace and change through inspirational talks, arts related programs and performances. Invited guests from the United Nations, Sudanese and Kenyan Governments, as well as young people from all walks of life concluded the summit with enlightened smiles. Thumbs up to all. 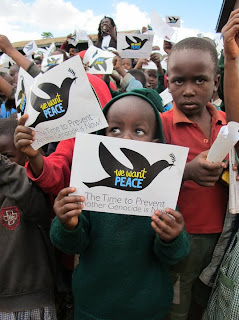 Peace, and love.
Onto the We Want Peace video shoot. Incase you've been hiding in an uncut bush somewhere, 'We Want Peace' is the globally initiated campaign spearheaded by Emmanuel Jal, renowned music star, actor, author, inspirational speaker and human rights activist. Directed by Ana Gabriel, the video was shot on the streets and slums of Nairobi, and features cameo appearances by Alicia Keys, George Clooney, Kofi Annan, Peter Gabriel, Terri Walker, Hinda Hicks and lots more. You can watch it here.
The campaign was launched in Kenya and is currently making its way across the UK, US and Canada. Emmanuel debuted the single at what was Africa's first and most enjoyable, Gatwitch Festival: 3 days of inspirational speeches, films, and a culminating concert, showcasing some of Kenya's most talented artists. 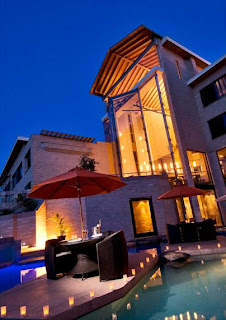 Tribe time.
Indeed, exhaustingly brilliant, to say the least. Good thing I had a most wonderful home to lay my hat at the end of every gruelling schedule: The Tribe Hotel. Located in the upscale area of Girgiri, The Tribe was stunning for its African simplicity. It's merge of tradition and modernity, smooth and effortless. West African artefacts so randomly - and yet perfectly - situated all over the hotel's grounds. The most picturesque of pools, and a locally inspired spa that I unfortunately had no time to experience (sigh). 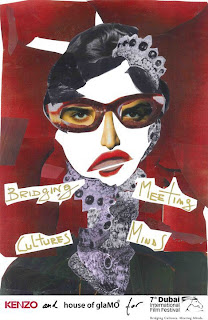 House of Glamo does it again.
Next up, a UAE rendezvous, with bougi's recently appointed Dubai starlet, Tamara Al Gabbani. Fashion designer, actress, model, and basically, a one woman empire in the making, Tamara's 'House of Glamo' label collaborated with Kenzo to produce this year's film festival's limited edition T-shirts. Understandably, the exclusively designed Tee's were completely sold out within 2 days of the festival's opening. The opening party saw Tamara in the most stunning of Ezra Santos gowns, while the closing party saw the both of us get our shoes dirty in Bab Al Sham's sand. Good times. Yea. He's still got it.
A refreshing sidebar to DIFF activity was the Guns n Roses concert in Abu Dhabi's Yas island. AXL Rose was pretty much the only original member, but despite his age, and new bandmates, the GnR vibe was very much alive.
Speaking of alive, I'm almost not. Time for some well deserved rest before returning to Africa for more ground work on what should be everyone's new year's resolution: seeking peace. While many of us hope for a stress-free and successful 2011, many others are praying for a bomb-free and liveable 2011. Let's do what we can to support Emmanuel Jal's beautifully simple and crucial message: We Want Peace
at 1:40 AM