With the Formula One Grand Prix on its way to Bahrain (along with plenty of celebrations), Grazia sat down with the Kingdom's leading entertainment impresario, Rozan Ahmed... 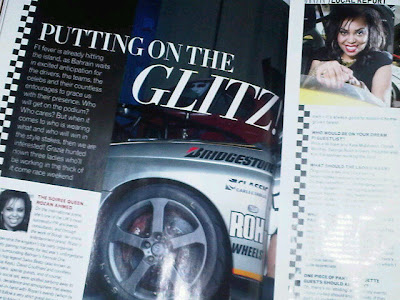 On the international stakes, she's one of the UK's most successful PR strategists, and through works of bougi, a "creative stream of brilliance" as she likes to call it, Rozan's also become one of the region's top party planners,  recently gaining notoriety for last year's unforgettable events during Bahrain's Formula One. 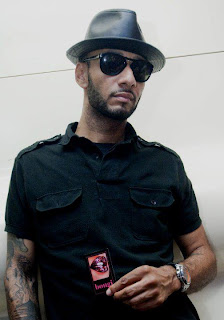 This way for more >>> pink link

David Coulthard, hip hop legend Swiss Beatz (also known as Mr. Alicia Keys), F1 drivers and special guests from across the globe were seen partying away to the music, decadence and atmosphere that can only be experienced at one of Rozan's bougi clad showdowns, which by the way, all follow a very strict guest list policy - basically, you'll have to know her to get in.

Who would be your dream guest/s at your F1 parties?
Prince William and his new wife, Oprah Winfrey, Osama Bin Laden (he could still be alive), Queen Rania of Jordan, Anna Wintour, George Bush, Grace Jones, and Kim Kardashian working the Guest List. 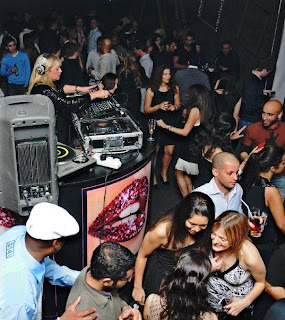 What should the ladies wear?
I love seeing personalities creatively reflected in clothing. Originality is key. Do make an effort, but at the same time do you. A dynamic dress oozing sophistication, complimented by edgy heels (comfortable enough to dance in, as that's notmally what my guests do - all night).

What is the biggest fashion faux pas you have seen at your parties?
Too many Gentlemen in shabby looking jeans. This really needs to stop. Generally the ladies do a wonderful job at all bougi affairs. There's a unique sense of style in this region when it comes to women's fashion, it tends to be extreme in either good or bad. We're only associated with the extremely good, obviously. 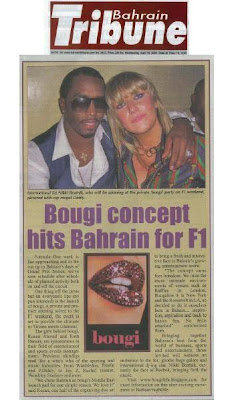 One piece of party etiquette guests should abide by?
There's no 'abiding' in any of our events. Those invited already know. If they don't, an invitation wouldn't be sent their way in the first place.

Which stars will be at your parties this year?
You can never tell with F1, especially in Bahrain. Confirmations are often last minute. Last year we had David Coulthard, Swiss Beatz, lots of racers and the UK's Manny Norte supplying the music. I hosted 3 events in 2 different venues, large and small, day and night, and it was a surprise on every occasion. I've also turned quite a few local hipsters into ''stars'' of their own.

Which driver revs your engine?
Haha... well, Lewis Hamilton was my neighbour growing up and so by default I always support him.
at 4:12 PM

Email ThisBlogThis!Share to TwitterShare to FacebookShare to Pinterest
Labels: Behind bougi: Rozan Ahmed, News and Views