In a collective effort to engage and empower youth across Kenya, Emmanuel Jal, world renowned artist, actor, author and activist, Juliani, Kenya's most inspiring & socially conscious lyricist, and award-winning photo-activist Boniface Mwangi held what was a first in a series of youth meetings in the country's hip hop capital of Dandora on Sunday 4 September 2011. 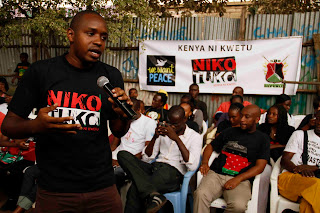 Dedicated to positive social change, the 3 young men and their change charged movements came together on this momentous occasion of inspiration to engage, discuss and enlighten on the holistic elements of peace, reconciliation and development in Kenya.

Nairobi based media, influential youth, Kenyan Hip hop pioneers Mau Mau and Robah of ‘Kalamashaka’ joined Emmanuel, Boniface and Juliani on a tour of Kenya's biggest dumping site, as entrepreneurial locals broke down how they profit off the materials we waste, eat what the rest of us have thrown away, and use what limited resources they have to make a living. 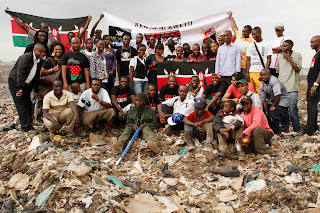 On arrival at the Mau Mau studio, Kenya's hip hop birthplace, Juliani welcomed and hosted all those in attendance to his hometown, while Boniface Mwangi screened Picha Mtaani’s touching ‘Heal the nation’ documentary, focused on the tragedy that befell Kenyans after the 2007 December elections. 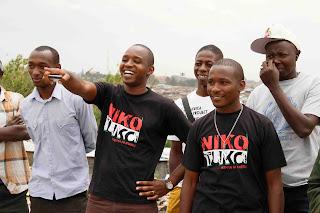 Thought provoking conversation ensued, with a generic understanding on the urgent need to forge new mind-sets across Kenya, adopting and embracing a culture of responsibility, accountability and change. ‘This is a project of champions’ said Juliani, ‘we will lead the realisation in responsible living, education and work’. ‘Dependency as a way of thinking has to stop’ continued Emmanuel Jal, ‘2007 can never happen again, it's time to bring about meaningful, long-term change’, expressed Boniface Mwangi. 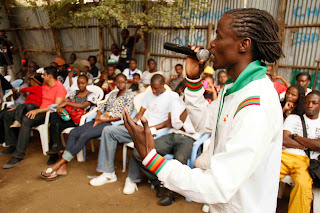 The historic discussion was documented on social networks such as twitter and facebook, triggering further debate, and thought-provoking response online. 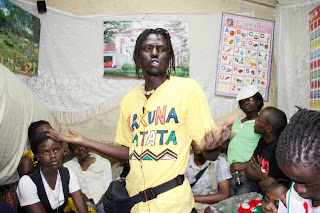 ‘We recorded an anthem soon to be released for next year's elections, focused on anti-tribalism and featuring a number of influential people in politics, the corporate world and entertainment...As of now, we are rallying an army, as many Kenyans as possible, who will take responsibility in creating a positive energy throughout the country. They will protect Kenya and become inspiring leaders in their own communities" said Emmanuel Jal. "Young people have to make that promise, to themselves and their people".

Emmanuel Jal, Juliani and Boniface Mwangi agreed to come together in mobilising the young people of Kenya to work towards sustainable development, peace and prosperity: a patriotic social movement that will amplify the voice of a new generation.

Similar sessions of inspiration, raising awareness on self-responsibility, positive action and long term change will be held in Kibera, Mathare and other parts of Kenya.