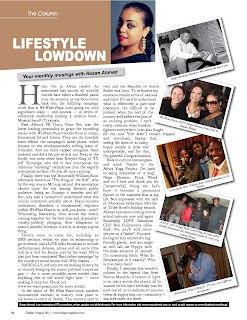 Hello. I'm in Africa (smile). As mentioned last month, all worldly travels have taken a thankful pause over the summer, as my focus tunes back into the fulfilling campaign work that is We Want Peace. Lots going on, with significant leaps — and bounds — in terms of influential leadership lending a musical hand, as well targeting hearts & mind, first. I'll explain. 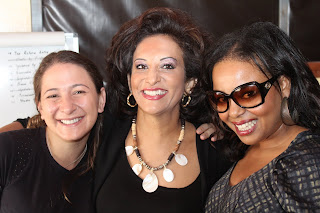 Africa Yoga Project's Paige Elenson, Gina Din & Rozan Ahmed
East Africa's PR Guru, Gina Din, was the latest leading personality to grace the recording studio with We Want Peace's double force in music, Emmanuel Jal and Juliani. They are the bonafide stars behind the campaign's latest phase, which focuses on the developmentally stifling issue of tribalism. And so, Gina rapped (!) alongside them - and did a fab job with it too. 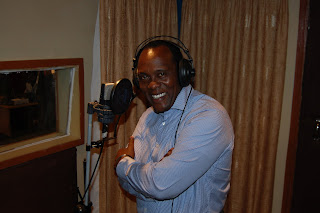 King of Kenyan TV, Jeff Koinange
Next in the booth, was none other than Kenya's King of prime time television, Jeff Koinange, who did in fact incorporate his infamous ''smoking'' catchphrase into the eagerly anticipated anthem. Indeed, all very exciting. 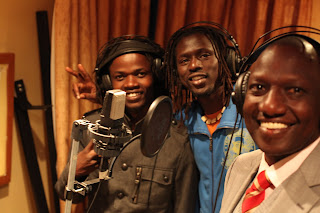 Juliani, Emmanuel Jal and (yes, we know he's in the Hague) Hon. William Ruto
Finally, there was the Honorable William Ruto, otherwise known as ''The King of the Rift'', who by the way, was an MC-ing natural. His association caused quite the stir among Kenya's public audience, being an Ocampo 6 member and all. But let's take a moment to understand what this crucial initiative's actually about...

Peace requires unification. Therefore, a fundamental objective within We Want Peace is to, well, you know... unite? Witnessing leadership (from across the board) coming together for the first time and physically/vocally/publicly pledging their allegiance to ensure peaceful elections in 2012, is always a good thing.

There's more to come, including an SMS petition for submission to Government, calling on 1 MILLION young minds (and more) to responsibly protect their country against a repeat of 2007's post election violence. TEXT your pledges and commitments to 595, like now. Tell us your thoughts, quotes, what peace means to you and what exactly you plan on doing to spread positive, peaceful and inspirational energy across your community.

Also in the works: A series of [very] empowering cross-country youth meetings, alongside Picha Mtaani's Boniface Mwangi. Live radio broadcasts, to include performances, debates, prizes and all sorts (this will be a first for Kenya, just by the way).  Gatwich Festival. And then some. We've also just been nominated 'Best online campaign' by Kenya's social media club. Why thanks. It's just the beginning.

In the midst of We Want Peace work, another monumental moment in history took place in my home country of Sudan. The country split in two, and the Republic of South Sudan was born. To be honest my emotions remain a mix of sadness and relief. It's hard to understand what is effectively a part-time liberation. It's difficult to be jubilent when the rest of the country still suffers the pain of an existing problem. I can't really celebrate when freedom fighters everywhere (who also fought for the now ''free state'') remain terrorised. Saying that, seeing the faces of so many happy people in Juba was unforgettable, and for that, I'm grateful. Congratulations. 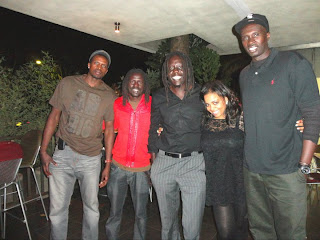 'Sudanese Knights': Luol Deng, Emmanuel Jal, Luol's [even taller] brother, Emmanuel Jambo & a [very tiny] Rozan Ahmed
Back to current shenanigans, and much thanks to the Africa Yoga Project, I'm back to being somewhat of a 'yogi'. Paige Elenson, Erica Wood and co. I love and thank you for [temporarily] fixing me. Not impressed with the lack of Moroccan baths in Nairobi, just by the way. BIG fan of Tribe Hotel's Sunday brunch. Overly enjoying Sankara's pad thai. Always a pleasure coming across actual baboons now and again. There's something addictive in Seven's butternut squash. Randomly, LOVE Safaricom CEO Bob Collymore's office desk. No, you'll still never see me on a ''safari''. Enjoyed feeling so tiny amidst the big friendly Nubian giants...and, you might as well call me Popeye with the *mass* amounts of spinach I'm consuming lately. What do Kenyans put in it exactly? Why is it so tasty here? 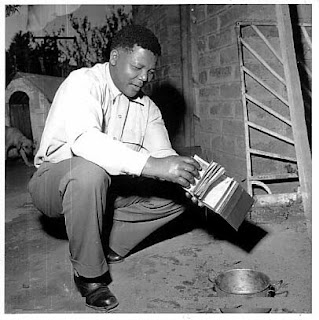 Finally, I dedicate this month's column to the legend that lives: Nelson Mandela. A beacon of light to so many across the planet, all he wanted on his recent 93rd birthday was for each one of us to dedicate 67 minutes towards supporting our community. I say, let's make it a week.
at 1:05 AM