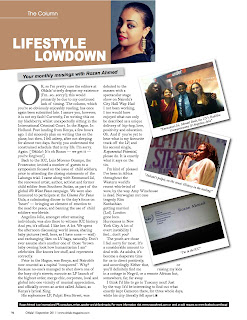 As seen every month in the GCC's Oh La La magazine
OK, so I’m pretty sure the editors at Ohlala! utterly despise my existence (I'm...so...sorry); this would primarily be due to my continued lack of timing. The column, in which you’re so obviously enjoyably reading, has once again been submitted late. I assure you (I really do), it's not my fault.

Currently, I’m writing this on my blackberry, whilst unexpectedly sitting in the International Criminal Court. In the Hague. In Holland. Post landing from Kenya, a few hours ago. I did sincerely plan on writing this on the plane, but then, I fell asleep, after not sleeping for almost two days. Surely, you understand the constrained schedule that is my life. I'm sorry. Again. 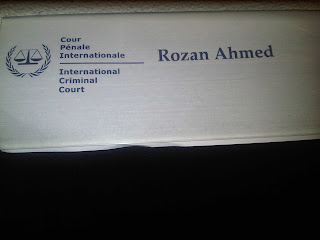 Proof?
Back to the ICC, and Luis Moreno Ocampo, the Prosecutor, invited a number of guests to a symposium focused on the issue of child soldiers, prior to attending the closing statements of the Labunga trial. I came along with Emmanuel Jal, the renowned artist, author, activist and former child soldier from Southern Sudan, as part of the global We Want Peace campaign. We were also honoured to participate at the Cinema For Peace Gala, a culminating dinner to the day’s focus on “heart” - bringing an element of emotion to the need for peace, and banning the use of child soldiers worldwide. 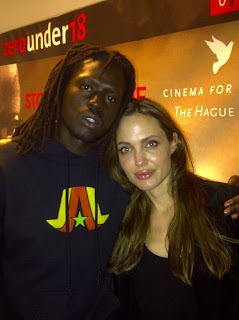 Emmanuel & Angie: Two modern day warriors, for peace.
Angelina Jolie, amongst other amazing individuals, was also there to witness ICC history. And yes, it’s official. I like her. A lot. We spent the afternoon discussing world issues, sharing baby pictures (well, hers, as I have none - wail) and exchanging likes on LV bags, naturally. Don’t ever assume she’s another one of those “brown baby owning look how humanitarian I am” celebrities. She knows her stuff, and represents correctly. 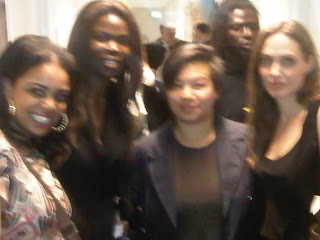 A blurred Rozan Ahmed, the ICC team & Angelina Jolie
Prior to the Hague, was Kenya, and Nairobi's now counted as a capital “conquered”. Why? Because no-one’s managed to shut down one of its busy city’s streets, execute an LP launch of the highest order, merge chic, corporate, local and global into one vicinity of musical appreciation, and officially crown an artist called Juliani, as Kenya’s lyrical King. 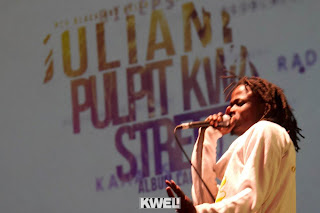 "2011's Hip hop event of the year" --> pink link
His sophomore LP, Pulpit Kwa Street, was debuted to the masses with a spectacular stage show on Nairobi’s City Hall Way. Had I not been working, I too would have enjoyed what can only be described as a unique delivery of hip-hop, love, positivity and education. Oh. And if you’re yet to hear what is my favourite track off the LP, and his newly released second single, Exponential Potential, please do. It is exactly what it says on the tin. 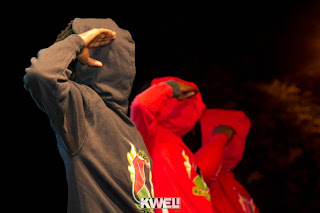 Salute.
I'm kind of pleased I've been in the spiritual safe havens of Africa throughout the Western world's recent whirlwind of wow, by the way. Amy Winehouse is dead. Norwegian nut case tragedy. Kim Kardashian getting married (excuse me as I go LOL). London gone loco. Hurricanes in New York City.

A lot of overt instability I feel...don't you? The youth are those I feel sorry for most. It's a considerable amount to deal with. As adults, it's become a desperate time for us to direct positively, and accordingly. Either that, or you'll definitely find me raising my kids in a cottage in Negril, or some remote African hut somewhere, far, far away.

Sidebar. I spent an afternoon in mountains of garbage the other day. Pink link. For all the wonderful reasons as to why. 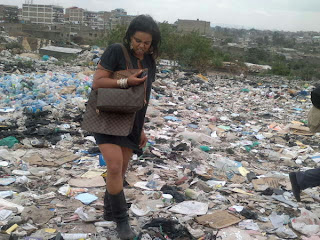 More proof?
Think I'd like to go to Tuscany next. It'd be interesting to find out what exactly kept Cameron there, for 3 whole days, while his city literally fell to pieces. Love always, London.
at 11:41 PM