Hoxton square's becoming quite the Londre hot spot.  Much like many areas ''of struggle'' in the captial (Hackney, Brixton etceter-ah), an air of sudden style is emerging from the east zone, as confirmed by Janelle Monae on 1 July, when she chose Hoxton's bar & grill as the venue for her first London show.

We first came across Ms. Monae back in early 2009, joining us to celebrate label mate Estelle's first Grammy win (indeed, golden moment). She told us of her own show at LA's Sky bar, her publicist proudly detailing a climb up the tree, and a jump in the pool, as part of the performance. 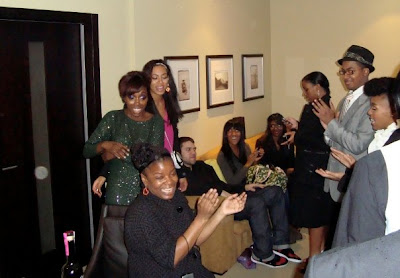 Let's play 'Spot Monae' ?
As an appreciator of the more intimare gig, London was shaping up to be rather good. And, it was. Very good. For a being so small, she explodes an energy on stage that's nothing short of ELECTRIC.

She's inventive, creative, explosive,  and simply, does not care. Beautifully constructed music vibrating through her every blood stream, her every nerve cell. Truly giving her ALL to the sold out crowd. 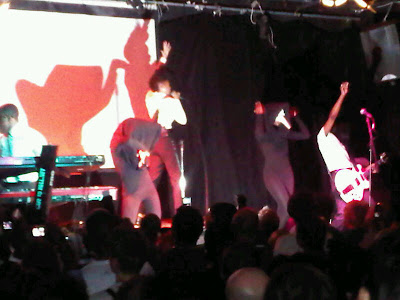 Quite hard for me to say this, as it may put a significant amount of pressure on the PYT (that's 'pretty young thing' for you, younger things), but, somewhere in that uber petit dance machine frame of hers, lies the spirit of James Brown. No. Really.

She's futuristic, and old skool, if that were ever possible (?), and we like her. A lot.

Email ThisBlogThis!Share to TwitterShare to FacebookShare to Pinterest
Labels: News and Views, We love music