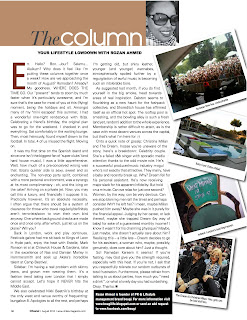 Err. Hello? Bon…Jour? Salamu...Alaikum? Why does it feel like I'm putting these columns together once a week? How are we approaching the month of August? Ramadan? Already? My goodness.
WHERE DOES THE TIME GO.
Our ''present'' tends to zoom by much faster when it's particularly awesome, and I’m sure that's the case for most of you at this (flying) moment, being the holidays and all. Amongst many of my "mini escapes" this summer, I had a wonderful one-night rendezvous with Ibiza. Celebrating a friend’s birthday, the original plan was to go for the weekend. I checked in and everything. Sat comfortably in the waiting lounge. Then, most heinously, found myself drawn to the football. In total, 4 of us missed the flight. Moving on.

Ibiza cool: Extra chilled
It was my first time on the Spanish island and since one isn't the biggest fan of 'super clubs' (and hard house music), I was a little apprehensive. Well, how much of a pre-conceived wrong was that. Ibiza's quieter side is sexy, sweet and so enchanting. The non-stop party spirit, combined with a more personal environment, was a synergy at its most complimentary - oh, and the icing on the cake? Arriving on a private jet. Now, you may call this a luxury, and financially I suppose it is. Practically however, it's an absolute necessity. I often argue that there should be a system of clearance for those who travel regularly/definitely aren't terrorists/soon to own their own bird anyway. One where background checks are made once and once only, after which, just let us on the plane? Will you?

Summer time live: untouchable
Back in London, work and play continues. Festivals galore had me sit back to Kings of Leon in Hyde park, enjoy the heat with Estelle, Mark Ronson et al at Chiswick House & Gardens, take in the excellence of Nas and Damian Marley in Hammersmith and soak up Akala's incredible talent at Camp Bestival.
Sidebar: I’m having a real problem with skinny jeans, and grown men wearing them. It’s a fashion trend taking over London that I simply cannot accept. Let’s hope it NEVER hits the Middle East.
We also celebrated Nikki Beatnik’s birthday at the only west end venue worthy of frequenting: bungalow 8. Apologies to all the rest, and perhaps I’m getting old, but shiny leather, younger (and younger) wannabes, atmospherically spoiled further by a regurgitation of awful music is becoming such an intolerable bore.
As suggested last month, if you do find yourself in the big smoke, head towards areas of real inspiration. Dalston seems to flourishing as a new haunt for the fashpack collective, and Shoreditch house has affirmed itself as an official hot spot. The rooftop pool is smashing, and the bowling alley is such a fresh (and yet, random) addition to the whole experience. Membership is rather difficult to attain, as is the case with most decent venues across the capital, but that's what I'm here for ;-)

Indeed, London's best kept secret.
Onto a quick note of gossip: Christina Milian and The Dream. Incase you’re unaware of the story, here’s a breakdown: Celebrity couple. She’s a failed r&b singer with sporadic media attention thanks to the odd movie role. He’s a successful producer/music industry mogul who’s not exactly that attractive. They marry, have a baby and recently break up. Why? Dream fell for his personal assistant. He’s now receiving major slack for his apparent infidelity. But hold on a minute. Can we relax for just one second? Women, by the way, can be very devious. Can we stop blaming men (all the time) and perhaps consider WHY he left her? I mean, maybe Milian pushed him away? Maybe she was in it purely for the financial appeal. Judging by her career, or lack thereof, maybe she trapped Dream (by way of baby) for sake of a guaranteed monthly income? I know it wasn’t for his charming physique? Maybe, just maybe, she doesn't actually care about him? Realising this – a little late – Dream decides to go for his assistant, a woman who, maybe, possibly, genuinely, does care about him? Just a thought.

Hey: Girls can be bad stuff too.
So! Ramadan Kareem it seems! If you're fasting, may God give you the strength required, especially with this heat. If you're not, I ask that you respectfully tolerate our random outbursts of total frustration. Furthermore, please refrain from talking to us about parties, how much you ‘’need a drink’’, or what a lovely day you had sunbathing. Okay. Thanks.
at 7:36 AM