So, as most of you know, Mr. Mohammed Al Turki, new and hotly tipped LA based movie producer, personality, and all round great guy (from Saudi Arabia - 'represent') is coming to Dubai.

He's on a special trip to promote future projects 'Arbitrage', starring Richard Gere, Susan Sarandon and Drake (!) , current releases 'The Imperialists Are Still Alive!', as well as the recently announced Ramin Bahrani production with non other than Zac Efron. Big. Yes. We know.

Whilst in Dubai, the youngest man of Middle Eastern descent currently making very impressive moves in Hollywood, will also co-host what you could call a 'soiree of gratitude', alongside friend and fellow starlet, Tamara Al Gabbani. The exclusive gathering of friends, colleagues, esteemed members of Dubai society and press, will take place in one of Mohammed's favorite restaurants, Okku. 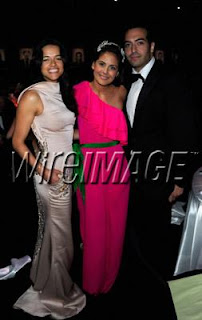 Mohammed and Tamara are offering two of you lovely supporters the chance to come along and enjoy yourself. Mingle with the city's finest, and basically, have fun. Email info@rozanahmed.com with your reasons as to why you should be there. Best answers = See you there.
at 12:47 PM