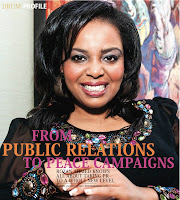 "I sit down at the Sankara hotel business lounge eagerly waiting for the lady who has had the chance to interact with prominent personalities from all over the world. She has rubbed shoulders with every who’s who – from celebrities to prominent politicians and wealthy businessmen/women.

Rozan Ahmed, an internationally renowned PR specialist, campaigner and writer, walks into the lounge, smiling and speaking in her husky voice. She comes across as the girl next door – quite friendly. Apart from being a PR genius, Rozan is also a peace advocate/activist and is currently behind a number of successful campaigns, one of which is We Want Peace (WWP), spearheaded by Emmanuel Jal - an internationally popular musician and former child soldier from Southern Sudan. The launching music video for WWP had messages from various well-known personalities. “Alicia Keys opens it, followed by George Clooney, Kofi Annan, Richard Branson and many more. The support we received for We Want Peace was high level and global, as well as grass roots, and local...exactly how we like to play it.”

When we meet for this interview, Rozan and Jal have just returned from The Hague, following an invitation from the International Criminal Court (ICC) to take part in a symposium focused on the issue of child soldiers, as well as witness the closing statements of the Labunga trial. After the trial, a gala dinner was held, during which Jal performed before Ocampo himself and other former child soldiers. “We were seated next to Angelina Jolie, who came along in support” says Rozan...all in a day’s work for her.

Only aged 30, her journey started when she was just 16 years old in the UK. “Growing up I had no idea what I wanted to do. All I knew was that I loved music, but I didn’t know how to go about turning that passion into a career. When I was 16 I heard on the radio that BMG Entertainment (now Sony Universal) was looking for street team members for P. Diddy. I walked into their offices, talked my way into the promotions department, lied about my age (they wanted 18 years and above) and got the gig. The work basically involved distributing fliers outside clubs, hanging posters in the streets and accompanying artists to events. Indeed, not glamorous! My first job was with Tyrese. He gave me a great recommendation by telling the head of promotions that I was good at what I did, and so should be retained despite being only 16!”

Rozan did carry on doing her thing as a street team member while simultaneously attending school for her Media & Communications degree at Greenwich University, and writing articles as a freelance music journalist. When she graduated in 2002, at only 21, she was offered the job of deputy editor with RWD magazine. “At the time it was a pocket-sized music & lifestyle based title, very underground, but within 18 months we had grown to become the biggest and strongest in our field. I utilised my contacts left, right and centre and did everything I possibly could to make RWD work. We were a small and dedicated team, pretty much family considering how much time we spent together. All of us, literally, did everything!”.

The peak for Rozan was when she was asked to work closely with the Princes’ Trust, facilitated by Prince Charles. This was for the first urban music festival in the UK back in 2004; it was a historic event as it was the first time that British Black music was put on equal footing with that of the USA; it was where Alicia Keys shared the stage with Jamelia and Jay Z with Dizzie Rascal. “My idea was to see these artists on the same stage, on equal par, not having one rely on the other and to appreciate the differing sounds. It was a great success.”

So how exactly did the lady behind great entertainment become a peace activist? “Well, after working with and within so much of the higher profile, I wondered what more I could do. I started developing an interest in politics, humanitarianism, and people’s perceptions of world issues. I wanted to better understand these issues...for example, why Africa remains poor despite literally bursting with resources; why Islam, as a faith, was being targeted for the destruction of the twin towers when only a few individuals were allegedly responsible.  How religion, in all its forms, is becoming institutionalised, almost? I basically developed an interest in the more holistic, globally inclined, psychological and socially shaping aspects of PR.”

That is how Rozan left the UK for Sudan in 2005. Her new job title was Public Information officer with the United Nations. “Our mandate for Sudan was to monitor the implementation of the comprehensive peace agreement between the North and South. My role was to desensitise the public when it came to information, protocols and generally what we needed to do as a people to make sure the agreement was implemented.” To mark the celebrations of one year of the peace agreement, Rozan brought together musicians to celebrate the event in style. “Music is a critical tool in unity and communication, particularly when it comes to young people. I brought in Emmanuel Jal (Southern Sudan) and Abdel Gadir Salim (Northern Sudan) – and put them on stage before a youthful audience as a musical symbol of peace and unity between the two sides...obviously the recent split has broken my heart!"

Although she was born and raised in the UK, Rozan had already visited Sudan on several occasions.  “The only thing I found difficult about working in Africa was seeing all sides of the social scale in one place – from incredible wealth to absolute poverty within 5 minutes of each other; that was a little traumatising.”

Rozan worked with the UN for four years before deciding to go independent. “I wanted to see how I could merge all my passions into one consultancy, from politics, to music, to humanitarian efforts and education. I wanted to work with people of equal tenacity, and only with brands I strictly believed in. Working at the UN was an unforgettable experience, and one I'd love to go back to, but there's also a lot of bureaucracy, I needed a bigger sense of freedom creatively”. This was the motivation that saw the setting up of rozanahmed.com and bougi in 2008, in the Kingdom of Bahrain.

How exactly did she settle on Bahrain as her new station? “I visited Bahrain once for the Formula One and just fell in love with the place. I was also intrigued because Michael Jackson lived there. Bahrain is a such a soulful little island, quiet, generous, great food, I could go on...” quips Rozan.

As any businessperson will attest, it was scary starting off on her own, but it was something she had to do. “The fact that there was no one but myself to direct me on this solo path was a little overwhelming. It was difficult to comprehend that everything that happens, henceforth, was down to just me. That can bring a lot of pressure. Up until today I struggle with decision making! Other than that it’s been an incredible journey.” She has represented many clients, and organised a number of great events both in and out of Bahrain. "The consultancy bases itself on fundamental services within public relations. I also wanted to align entertainment, my writing and love for music, so I started bougi, a popular network for people both aspirational and inspirational, encompassing all social media and special events".

Some of the people she's worked with include Jay-Z, Beyonce, Akala, Estelle, Emmanuel Jal and, from Kenya, Juliani. She was the one behind the launch of Juliani’s latest album, Pulpit Kwa Street, which took over Nairobi's City Hall Way back in August of this year, in unforgettable fashion. Juliani is another prominent face of We Want Peace, alongside Jal. The campaign in Kenya is all about rallying, lobbying and speaking to members of the public, politicians and the corporate world, sharing a vision of peace, unity and enlightenment with them all. “We take a holistic approach to this: if people are fighting, why are they fighting and who gave them the guns? We want to open hearts and minds into understanding what stops peace, and what can then bring peace, through a series of meetings, shows and other planned interactive activity”.

Juliani was picked for this project because "it works...he's very active when it comes to social development, and thoroughly believes in inspiring the youth. We're all shared on our outlooks and that's what brings us together, naturally”.

How did she end up in Kenya in the first place? “We Want Peace started off as a global campaign in December 2010, focusing on the referendum in Southern Sudan. Following a peaceful referendum, Jal came up with the idea of coming to Kenya, honing in on issues of good governance and peace building in run up to the country's elections in 2012."

With a peaceful election in mind, WWP established a thought process of youth-led responsibility; that they will make themselves responsible for sustaining an environment of peace under all circumstances. "Anti-tribalism is key, and as part of the campaign we've recorded a song featuring Jal and Juliani, and even have a few politicians and other influential figures rapping, among them Martha Karua, William Ruto, Jimnah Mbaru and more. We received some initial criticism for including Ruto, but there's no regrets, because if he is in a position to say to his people, “We want peace” and they listen, then that is immediately a step in the right direction. We’ve also met with Prime Minister Raila Odinga who is very supportive of our efforts."

Working between the Middle East, East Africa and Europe, what is the most any client has spent on a gig? “There is this client of mine, a wealthy businessman from the Gulf, who spent $250,000, (about Ksh23 million) in one night”. Wow. Her advice to anyone who wants to venture into PR? “Prepare yourself. It’s not easy. Build your connections and abide fully by the iceberg principle! There's a massive amount of work that's always put in, a foundation that has to be built. This means a continuous enhancement of your skills, builidng and maintaining relationships, long (random) hours, and a constant professionalism.” Her last words to Kenyans, especially in run up to the elections next year: “Exercise the trickle-down effect. Take this campaign into your own hands and do what you need to do to maintain a positive environment within your communities. Take responsibility for Kenya, protect her and all that she's worth...be that positive role model you would like for others to become”. 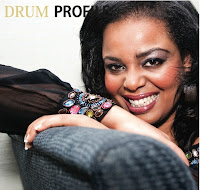 Rozan’s dad is a paediatrician and her mum would have been a diplomat had she not been busy raising her kids.

She is the first of four children, with a sister in New York and two brothers in London.

She's a workaholic and tends to be in a different country every month or so.

She always feels the need to settle down whenever she comes to Nairobi and wouldn’t mind a Kenyan husband.

She thinks Angelina Jolie is super intelligent and Beyoncé is polite, shy and cute.

Rozan would love to have up 4 or 5 kids in the future.

Her favourite music is "everything soulful, and older".

She's Muslim and finds balance in her life by praying. She also practises yoga.

Her favourite food is all forms of Thai salad.

Email ThisBlogThis!Share to TwitterShare to FacebookShare to Pinterest
Labels: News and Views, We Want Peace