bougi founder, Rozan Ahmed, first exposed her love for writing back in 2001 as Deputy Editor for the UK's RWD magazine. Once upon a time, an underground title, once following an underground scene, once called garage, or grime, or urban music, or "woducallit", as so perfectly put by the once underground artist, Wiley.
Soon enough, RWD became the UK's biggest, baddest, boldest music & lifestyle publication, ever - for a sound/way of life/youth invasion that literally gave the entertainment industry no choice but to embrace it.
On celebrating RWD's 10th birthday this year, Rozan made a return appearance, and it went a little something like this... 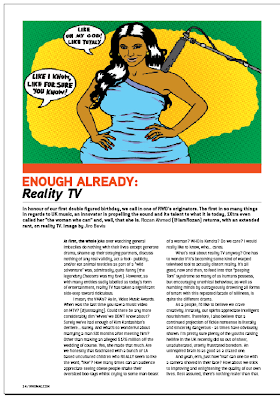 In honor of our first double figured birthday, we call in one of RWD's originators. The first in so many things urban music, an innovator in propelling the sound and its talent to what it is today. 1Xtra even called her "the woman who can" and, well, that she is. Rozan Ahmed returns, with an extended rant, on reality TV.

At first, the whole joke over watching general imbeciles do nothing with their lives except generate drama, shame up their straying partners, discuss nothing of any real validity, act a fool - publicly, and/or eat animal testicles as part of a "wild adventure" was, admittedly, quite funny ("Cheaters" was my fave - just legendary, wasn't it). However, as with many entities sadly labelled as today's of form of entertainment, reality TV has taken a significant side-step, toward ridiculous.

I mean, the VMA's? As in, Video Music Awards. When was the last time you saw a music video on MTV? (I'm just saying), how many more asses have to die before we suddenly realise, "hmm...maybe we shouldn't support such utter stupidity?" Could there be any more considerably dim "wives" we DON'T know about? Surely we've had enough of Kim Kardashian's derriere..surely. And what's so wonderful about marrying a man 6 months after meeting him? Other than making an alleged $17.6 million off the wedding of course - yes. She made, that much.

Are we honestly that fascinated about a bunch of LA based uncultured children who REALLY seem to like the word, "like"? How many times can an audience appreciate seeing obese people shake their oversized boo-tays whilst crying to some man-beast of a woman? WHO is Kendra? Do we care? I would really like to know, who...cares.

What's real about reality TV anyway. One has to wonder if it's becoming some kind of warped televised tool to actually distort reality. It's all good, now and then, to feed into that "peeping Tom" syndrome so many of us humans possess, but encouraging unethical behaviour, as well as numbing minds by outrageously drowning all forms of smart with this repeated facade of silliness, is quite the different drama.

As a people, I'd like to believe we crave creativity. Innately, our spirits appreciate intelligent nourishment. Therefore, I also believe that a continued projection of fickle nonsense is literally and sincerely dangerous - as times have obviously shown. I'm pretty sure plenty of the youths raising hellfire in London recently did so out of sheer, unadulterated, utterly frustrated boredom. An uninspired brain is as good as a crazed one.

And yea, erm, just how 'real' can one be with a camera shoved in their face? How about we stick to improving and enlightening the quality of our own lives. Rest assured, there's nothing realer than that.
at 2:50 PM