Some bullet pointed thoughts on Kim Kardashian's recent visit to the glossy emirate, and the following online dramas that ensued.

She visited with her mother to open a milkshake store. Dubai lost its mind. A media frenzy of disproportionate levels. A town, gone wild.

Then, she left. The blame game of hypocrisy, begins. 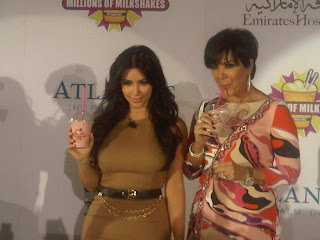 1. I don't know the girl personally, but my observations are as follows: She's...pretty. Polite. More of a forced icon, rather than one who's genuinely made a difference in the world. She probably has no idea why such a large part of the material world's so obsessed with her either. But hey, it is. She's enjoying it...fully taking advantage of the moment...making as much money as possible.

2. Kim clearly relies on her mother, a lot, who I had met with at the Atlantis (t'was my first time there too - can someone tell me what that ceiling's about? Bit ghoulish).

It's not Kim's fault the UAE's media houses seem to support Western talent far, far more than they do locally based creatives. That's the UAE's problem. If you don't like it, do something about it. This is nothing new. Dubai can never truly be celebrated if it continues to primarily celebrate those elsewhere. Don't blame Kim for that.

5. So she made a sex tape. Not cool. But Paris did too. Eva Longoria's history isn't fabulous either. Neither are some elements of Dubai's nightlife. Once again. Don't blame Kim for that. Unless you have some kind of personal gripe, with her?

6. Dubai mall issues courtesy cards to women who wear skirts slightly above the knee. 2 days ago Dubai mall celebrated a woman who many have seen naked. "Isn't it ironic...don't you think?"

So you see, the levels of hypocrisy are, unfortunately, everywhere.

7. A rather confused Emirati designer (so it would seem) decided to go ethical on us after her fashion label was rejected by Kim. Scores of tweets excitedly showing love to the Kardashians prior to their Dubai arrival were promptly deleted from the label's twitter account when Kim and Kris chose NOT to support the brand. Then, suddenly, a holy lash out? Based on morality? Darlings. Please. Excuse me as I continuously LOL.

8. Let us be clear, the confused hypocrisy that embodies the likes of some, is actually a much wider dilemma - personified.

Remember, when you point the finger, 3 more point back at you.

9. If, in your opinion, media support for Kim was far-fetched, then write to your editors, your newsrooms. Demand better coverage of truly inspirational homegrown talent (I can name a few right now). Support one another. Point at the good. Eradicate the bad. Respect genuine opinion. Highlight the contradictions (don't ignore them, that's how they manifest). Praise the locally gifted. Oh...and less of the jealousy. Large up security. Increase creativity.

May also help if your discrepancies are made clear before the fact, not after?

10. Finally, values, if not consistent, aren't values at all. I'm just saying.

We live in a crazy world. We can either let it be crazy. Or we can do something [positive] about it. That doesn't include being late with [contradictory] complaints.

Be good. Be great. Be consistent. That's all there is to it.